Graham Nash wrote these lyrics as part of a song which followed the anti-Vietnam protests in Chicago during the Democratic Party Convention in 1968 and around the time of the trial of the ‘Chicago Eight’ for inciting a riot.

Chicago was much more peaceful yesterday as we landed at O’Hare International in the midst of a hot summer day with temperature up around 100 degrees.

The trip from the airport to the Downtown area took around 40 minutes in a train which left from within the terminal buildings and cost $2.25.

This looks like a great city, and we’re up early to try to see more of it by cycle before it gets too hot. 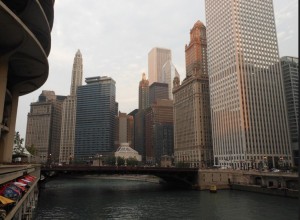