It looked like it was going to literally rain on the parade for the 4th of July as we packed our gear and checked out of our apartment in Cambridge.  It had been a great stay; another AirBNB success.

We’d decided before this trip to seek out a hometown parade for the 4th of July and with the help of Google, found a very likely contender in Chelmsford, MA, North West of Boston.  A friend on Twitter had also suggested Hingham, which is South of Boston, but after seeing the planned special event road closures we decided that it was probably going to be a less risky traffic option to go North.  The car was due for return to Logan in time for our 4.30 flight to San Diego. We duly set off in our rental car, with all of our baggage on board and Lynette in the navigator seat providing live directions and updates courtesy of Google maps and the iPad using the microsim we’d picked up at the AT&T shop in Santa Monica.  It proved to be a very easy and amazingly useful travel and information aid. 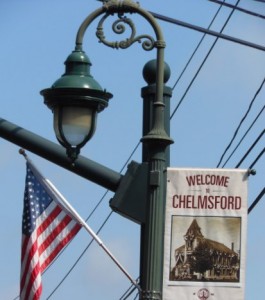 Chelmsford is a beautiful town, and decked out in its absolute red, white and blue splendour.  We were in luck, and spent the next couple of hours marvelling at the community connection and pride exemplified in the parade.  It really was an amazing experience, and everything we had hoped for.

The footage below will give you an idea of the parade.

If you have any comments, please feel free to click and add your comments.

(Keep watching, as the vision sorts itself out.)

Leaving Chelmsford, we bustled from freeway to freeway: directed by satellite sometimes down seemingly illogical small roads to link one multi lane carrier with another.

The rental shuttle drops us at the airport on a very quiet afternoon at Logan, and we’re quickly through security with plenty of time for some online catch-ups and a New Institute mailout and site update.

Despite being long, at six hours, the flight to San Diego was uneventful and San Diego airport was also quiet as we picked up a Dollar rental car shuttle and then our ride for the next 24 hours; a Chevrolet Impala.  As we’d already spent time in San Diego and knew the basic lie of the land it wasn’t long before we were checked into our hotel and arranging chairs on the tenth floor to watch the Big Bay Boom: the city of San Diego fireworks display over San Diego harbour.  Below us in the streets we could see people thronging toward the water front as the pre show anticipation built.  Then… the whole lot erupted about ten minutes early! A huge set of explosions rocked the buildings and the sky was alive with flashes, shimmer and bright firework colours.

A malfunction had caused the Big Bay Boom to live up to the name!

We had just witnessed a pyrotechnical premature conflagration, and it was all over.

We’d just seen something which was quickly all over Twitter and being reported in the press worldwide; including this piece from the Sydney Morning Herald.