After a long wait for a delayed flight from O’Hare International in Chicago, we finally take off and climb to the East, out over Lake Michigan, with the towers of downtown Chicago off to the South. It’s amazing to think of the size of this system of Great Lakes and it takes a while before the Eastern shore of Lake Michigan comes into view and we cross the Canadian border for a while before overflying upstate New York and into Massachusetts. 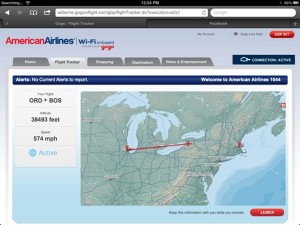 Inflight wifi is great and means that it’s possible to tweet and upload photos from mid-air.

Just as we did in Washington last year, it’s time to marvel again at the tenacity of the ‘navigators,’ the canal builders who constructed hundreds of kilometres of canals, providing navigable waterways for transportation.  In Washington, we cycled along part of the old towpath for the Chesapeke and Ohio canal, where here, we now overfly, at 38,000 feet, the Erie Canal, which was hewn from Albany on the upper Hudson, to Buffalo; joining the Eastern seaports at New York with the Great Lake system: a pathway into the mid west. 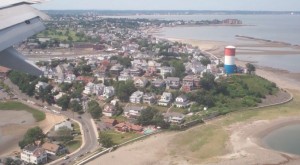 The clear sky above Boston allows us some great vision of beautiful homes with faces raised to the sun as we swoop in to land at Logan International just across the harbour from Downtown Boston.  We get a cab to our next ‘home’ for our stay in Boston. 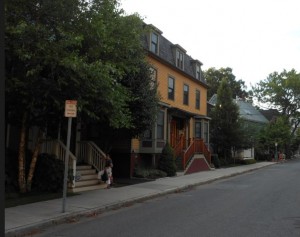 We’ve once again used AirBNB to book an apartment and this time it is within walking distance of Harvard Square, the bustling hub of the area around Harvard University: one of the Ivy League, and founded in 1636 as a private University with a simple, yet powerful motto: Veritas.

We find the key and open up a pleasant, light and airy apartment in a lovely residential street, where students cycle or walk past, and the trees; full with their summer green, provide a dappled light in the hot summer afternoon. 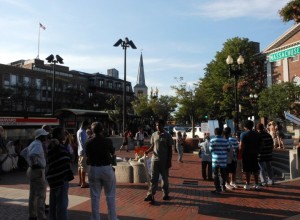 We walk on up to Harvard Square and its collection of cafes, bars and restaurants, as well as milling tourist groups and a protest underway in support of something to do with Bangladesh.

We walk across the road into Harvard Yard, a pleasance of green and beautiful buildings; all of which could whisper the memories of famous scholars and achievements.

High above the steeples and light standards which reach up toward the blue in the late afternoon, a jet stream looks like the remnants of a near miss above Harvard Yard. 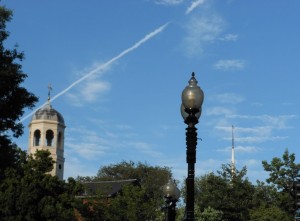 We stroll around the lovely grounds, before gathering a few necessities for breakfast and some Samuel Adams Boston lager for refreshment and walk back to our apartment, before a nice dinner at Daedalus, a restaurant on Mount Austin street, next door to the site of the former Club 47, which is famous as a venue for the growing American Folk Scene in the late fifties and early sixties: hosting singers like Joan Baez and Bob Dylan. It is now a cleaner.  The times they are a’changing. 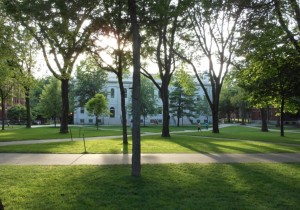 We’re planning on riding the T, the Boston subway tomorrow, into downtown and hopefully to a bike rental store for a look around downtown Boston, Boston Common and back bay before a cycle along the Charles River which King Charles of England decided should be named after him.

Nice work if you can get it, I guess.