After a bit of a sleep in while we still get our body clocks in line, we headed out and found a cafe nearby for breakfast before working out a plan for the day.  Despite the fact that it’s supposed to be summer here we were rugged up in layers and jackets and scarves with a predicted maximum of 13 degrees. 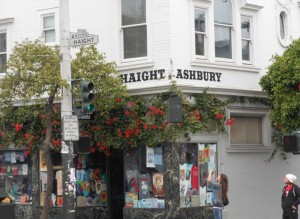 Our loft is in Haight St, so we decided on a walk West to the Haight Ashbury area, famous as the centre of the flower power movement back in the sixties and the place still has a vibe which makes baby boomers smile with nostalgia for a period where so many believed that things could be so different.

The area still has the occasional waft of smells from the sixties and lots of shops dealing in smoking apparatus and ‘pre-loved’ clothing fit for a sixties resurrection. Hip dudes skateboard in the street while long grey haired, wide eyed veterans search for their yesterdays. 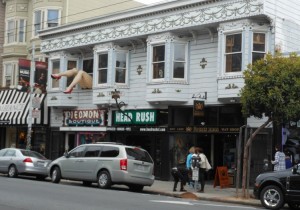 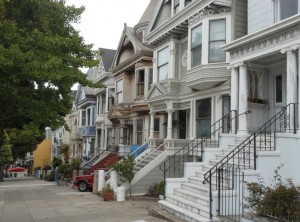 Like most of San Francisco, beautiful streetscapes abound, with intricate woodwork and beautifully decorated terraces.

Just along from the intersection of Haight and Ashbury we find a bike hire store and set about getting hold of a couple of bikes to explore a bit further afield with a ride through Golden Gate Park.  We sign up for a 24 hour hire and head West through the park.  The temperature rises markedly as we near the Pacific Shore and then proceed to Lands End. 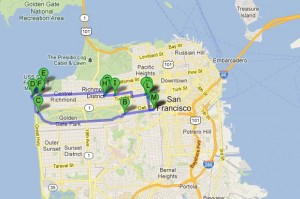 All up, a walk and cycle through some fairly hilly terrain of around 20 kilometres or so. We’ve managed to see a good slice of the Western part of San Francisco and plan to attack a ride across the Golden Gate tomorrow.  Tonight, it was a dinner in the Mission, organised as a ‘meetup’ by AirBNB, the service we used to rent this loft in San Francisco and the apartment we have booked in Boston.