One of the great things about travel is the opportunity it provides to discover things about places that you didn’t initially imagine. Chicago has been one of those discoveries.

Today, we hired bikes and headed East from Downtown along the River Walk and then South along the lakeshore of Lake Michigan. It’s amazing to be on the edge of such a huge freshwater lake which actually supplies the drinking water for the city itself, but which looks like a sea; stretching off as far as the eye can sea. 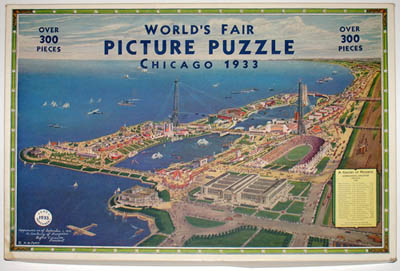 We ride down to the area where the Chicago World Fair was held in 1933.

Then, as the heat lingers, we turn North again and cycle back up to Navy Pier: an amusement park which projects out into the lake just near the entrance to the Chicago River.

A short visit reassures us that amusement piers don’t really differ much around the world and we are back in the saddle and riding North again, past swimming lanes in the lake and boardwalks which stretch out across the sand of artificial beaches, where it’s clear that the city can come to cool off on summer days. 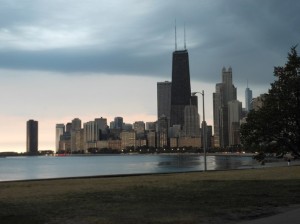 By this time, the Western sky is darkening in readiness for a storm, and we leave the waterfront and cycle West to the Chicago History Museum; not far from Lincoln Park and the site of the gatherings of Yippies and the youth who came to Chicago in 1968 to ‘change the world.’

The museum opens our eyes to the huge role that Chicago has played in the shared American psyche.  We wander around exhibitions while the storm and summer rain passes by, marvelling at the things we hadn’t known before.

We’ve only just come to Chicago, and we leave tomorrow.

In the meantime, please enjoy some of my reflections on the flip camera footage from today’s bike ride and the events which took place when I was a teenager, growing up in country NSW.

Chicago from Roger Pryor on Vimeo.