San Diego sits a few hours to the South of LA, and, as Lynette says: “flies under the radar.”  That is, we don’t seem to hear much about  a city which is actually a very pleasant combination of the old and the new, nestled beside the harbour which has traditionally been the home to the huge US Navy Pacific Fleet base.  We can imagine that this must have been a hive of frantic activity during World War Two following the Japanese attack on Pearl Harbour. 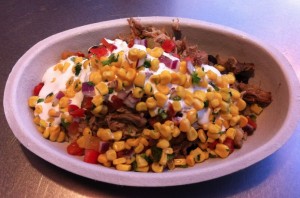 San Diego’s proximity to Mexico makes it an ideal place to enjoy some Mexican food and you can’t go far wrong with a fresh Burrito Bowl for $6.50 as a lunchtime treat.

The Convention Centre sits alongside the bay, with nicely landscaped park areas where multi million dollar yachts tie up and a parkland space has been set up for a summer ‘pops’ series of concerts by the San Diego Philharmonic.

In the convention centre itself, around 16000 conference attendees from the US and around the world cover an average of almost 10 kilometres per day moving between presentation rooms and keynote sessions as well as the exposition hall which covers the equivalent of five football fields.

The Tuesday keynote was provided by Dr Yong Zhao, whose work I have admired for a number of years since I first heard him coin the term ‘glocalisation’ to reinforce the potential we have to connect within a ‘metaverse’ at both a local and global level simultaneously.  His keynote didn’t disappoint, and he attacked the sacred cow of international testing programs like PISA by making the observation that China did not have a party when Shanghai topped the world league tables in PISA: they’d prefer to have a few more like Steve Jobs.

The shot below shows Yong Zhao walking onto the huge stage after an introduction by retiring ISTE CEO Don  Knezek.  You can see the keynote on YouTube here - (You’ll need to fast forward to the 54.30 mark to get to Yong’s entry and keynote.) 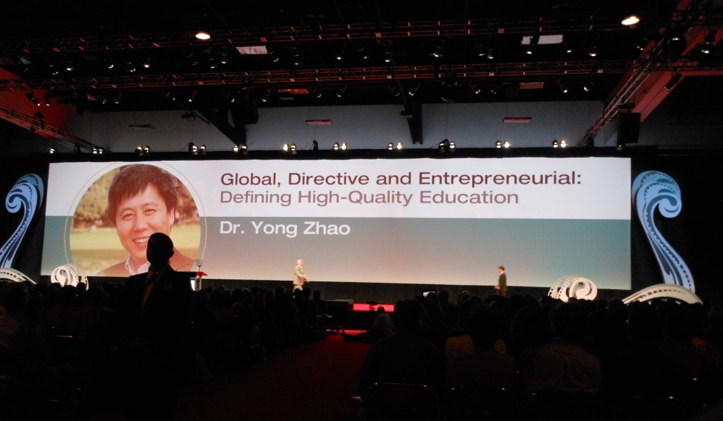 I’ll be writing a separate piece about ISTE itself, but, suffice to say, it was an opportunity once again to renew some acquaintances with  a number of people and to meet with others to discuss possibilities related to some programs and use of contemporary learning tools.

Separating the bayside area from the main part of ‘downtown’ San Diego is both a heavy rail line and two parallel light rail lines with a series of level crossings complete with bells and boom gates reminiscent of the Stewart Avenue crossing in Newcastle.  Given the current argy bargy around the rail line in Newcastle, it seems that other cities around the world manage to find ways to deal with such a scenario without it being an either/or proposition.  Maybe in Newcastle we need to think a little differently and look at ways that we can conceptualise how we use the spaces we have and be creative about access. 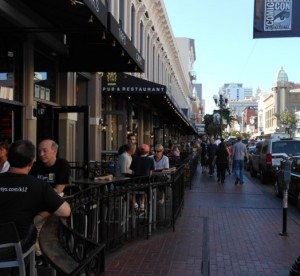 Across the lines from the Convention Centre and we enter the Gaslamp Quarter which is literally street after street of restaurants and bars. Once again, this is the type of density of entertainment offering which adds enormous value to the convention usage and tourism potential of San Diego.  Apparently around 60 conventions per year are held at the Convention Centre and, if we added up the injection of dollars into the city via the hospitality and other service industries, then this is a very significant economic generator for the city.  While Newcastle is certainly not on the same scale, imagine what some of the possibilities might be in re-imagining the CBD as the ‘Old Town’ and developing a blend of both short and long term residential options as well as some contemporary convention style facilities: all under three hours from the largest city in Australia with the benefit of easy access to vineyards, Port Stephens, and onward flights to Brisbane, Melbourne and destinations like Ballina/Byron Bay. 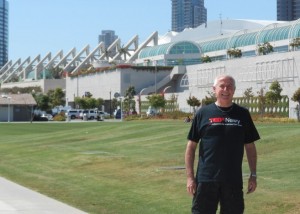 I was proud to be able to present my session on Wednesday morning wearing my TEDxNewy T-Shirt to draw attention to the transformation which is happening in Newcastle as a whole range of people connect and collaborate to look at ways to design and create Newcastle as a city of ideas and innovation based on both a traditional heritage of creating and ‘making’ and a vibrant contemporary connected community focused on the positives within our city.

As the conference wound up, we took the opportunity to explore a litte further afield by renting a couple of cycles and using the paths which provide access along the shoreline to a number of historic ships tied up, including the massive USS Midway, one of a large number of aircraft carriers, or ‘flat-tops’ which provided a revolutionary change in sea going warfare and certainly provided much of the forward attack capability in the US Pacific engagement.  Further up along the bay and sailing ships lie alongside the dock, recalling earlier times when access to the West Coast of ‘the Americas’ was only achieved after fearsome passages around Cape Horn, in the latitudes where hands could freeze in the rigging while furling stiff sodden sails in a Southern gale.

Alongside the magnificent bayside Hilton sits the headquarters of the Dole shipping operation which runs regular container ship voyages to Central and South America, returning with cargoes of bananas for the US markets.

All in all, it’s been a great experience to visit San Diego and we’ll actually fly back here on the evening of the 4th of July where we’ll stay overnight before driving the few hours North to LAX for our return flight to Australia; taking in the sights of beachside areas like Huntington.

This blog update is being done high above the US on an American Airlines flight from San Diego to Chicago, where the temperature on arrival is predicted to be around 36 degrees celsius: back to summer and apparently a high humidity.