One of the wonderful things about this trip is that, unlike last year, it’s not a trip being done on’my last legs.’ After returning from ISTE and the USA in July last year, I underwent bilateral knee replacement surgery and the knees which had carried me around for well over fifty years simply became ‘somebody that I used to know.’  Now, beyond the issue of setting off the machine at airport security, the ability to walk without pain, and get around a hilly city like San Francisco has actually left me in tears of joy on more that one occasion.  It is difficult to describe how regaining a level of mobility can reinvigorate and provide such simple pleasure.

We’re now on the last afternoon of our stay in San Francisco.  All up, we’ve cycled and walked for many miles around this beautiful city; engaging totally with the lovely local neighbourhoods and streetscapes.

For the first few days, as described in past posts, the weather has been foggy and dreary.  Yesterday, however, as if to reward, San Francisco parted its mists and wonderful clear days have followed.  We set off yesterday morning to catch a bus and then walk the rest of the way to the top of Twin Peaks; the highest hill in the main San Francisco area.  The knees were totally without pain, and we kept on, all the way to the top, where a huge pink triangle adorned the hillside.

The pink triangle is a community recognition and respect for the gay people who, in the concentration camps of the second world war era were marked by the Nazis with a pink triangle to set them apart from Jews, who were marked with yellow; and the Seventh Day Adventists with purple, and so on.  It’s a powerful reminder of the way that humanity can create such an horrific focus on what sets us apart: rather than a commitment to the wonderful things which we all share as people, members of the human race.

The view, on a clear day like yesterday, from Twin Peaks was stunning.  We spent ages just admiring the view, looking out over the areas where we had previously walked and cycled, and looking across the bay toward Oakland, with its shoreline studded with massive container terminals. 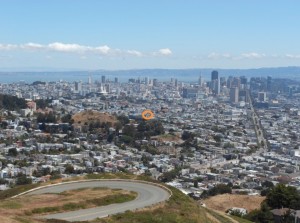 The skyline of downtown San Francisco and the sweep left around to the Golden Gate Bridge, shining in the sunlight reminded us again of the reason that so many people see this as one of the most lovely and liveable cities in the world.  We were able to pick out the general area where the loft in which we’re staying is located.  You can see it marked with a small circle on this shot.

That street to the right of the circle, which runs up toward the downtown skyline is Market Street, which is to be the route for the Gay Pride march on Sunday, and we walk down off Twin Peaks to the Castro area where many gay couples are already gathering to gear up for the celebrations to come.  We then head back toward our loft, stopping at a relaxed cafe called ‘Bean There’ for a Mediterranean vegie platter, coffee and free wifi.

I then elect to use the rest of the afternoon to work on finalising my presentation for ISTE while Lynette heads out to go shopping and to get a massage.

We top off a great day by trying another one of the restaurants which our AirBNB host has recommended. It’s literally just up the street and around the corner and we enjoy some great Indian food at Indian Oven.

We’re planning on trying out more of the public transport options tomorrow and using the BART to whizz across to Oakland under the San Francisco bay.