Scott McKenzie may have had a hit with his advice: “If you’re going to San Francisco, be sure to wear some flowers in your hair..” but, I’m afraid there’s nowhere for any blooms with this hairstyle. It doesn’t matter though as we greet a lovely sunny day in Monterey, and drink our ‘Foglifter’ coffeee as the fog slowly begins to burn off out over Monterey Bay.

Yesterday afternoon, we had a walk along Cannery Row, where, for the first half of the 20th Century, the demand for canned sardines created a bustling industry here in Monterey; providing the characters and backdrop for the famous John Steinbeck novel Cannery Row.

One of the signs tells the sadder side of the story: ‘From boom to bust in fifty years’ 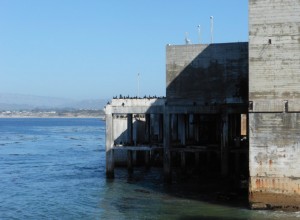 Now, it is a row of retail, restaurants and retreats: a tourist drawcard.

We found a nice restaurant and enjoyed some great seafood, with baby clams and pasta along with very tasty seared scallops, washed down with some very nice local Pinot Noir and a tall schooner of Lagunitas India Pale Ale.

Despite it being early summer, it was extremely chilly as we walked along to a local bar to catch a band playing covers of classic rock hits with the conclusion that we missed the quality of the live music at our usual local: The Wicko. 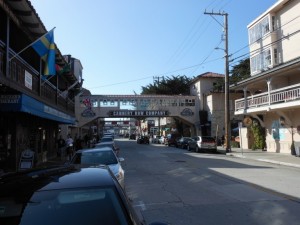 This morning, we say goodbye to Monterey and will have a quick look at the coastline south of Monterey Bay before heading North to Silicon Valley and then into Lower Haight for 5 nights in SFO.