Our last day in San Francisco dawned clear and bright again, as if giving the thumbs up to the huge numbers expected to take part in, or watch, the annual Gay Pride parade in San Francisco.

We take a brief stroll through the Lower Haight neighbourhood and catch the light rail to Civic Centre and head up the stairs to the surface where Market Street is already alive with the sights and sounds of the parade.  Corporate floats and groups from the Police, from the District Attorney’s office and a range of organisations demonstrate  the vast range of people proudly proclaiming their sexuality. 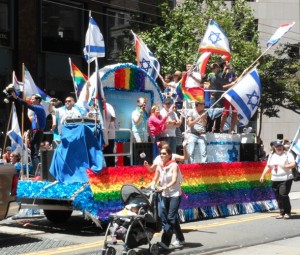 Huge crowds line the streets with lots of people getting into the spirit in a variety of outfits.  Even church groups have entered floats.

The size of the parade is enormous.  We watch for a while and then decide to use the BART to take a trip acros the bay to Oakland.  We make the trip to Oakland, have a coffee and a break, and a short walking look around the downtown area and then return to the Embarcadero BART station to find that the parade is still underway.

We watch the last groups to end the parade: the rubber men of San Francisco and the Master and Slave groups, before the parade abruptly ends, and the street cleaning teams swing into well 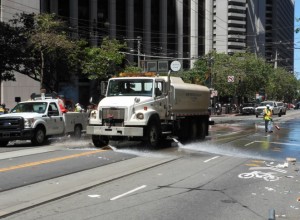 drilled action, shifting barricades, sweeping rubbish and using motorised street sweepers to get everything back to normal.

We walk on up the hill to Chinatown, where we browse amongst the usual array of shops selling a host of items, and find a tea shop where a very pleasant staff member explains the intricacies of the variety of teas available; with a reference to the parallels with wine appreciation.  We’re hungry by this stage and find a simple Chinese cafe serving excellent dumplings; and enjoy the break, before walking on to nearby Little Italy, where leafy streetscapes provide an inviting setting for a large number of cafes and restaurants offering Italian delights. 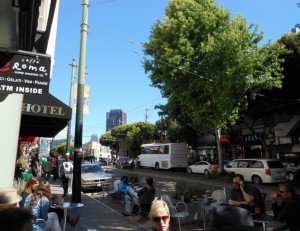 We are served coffee in cups which, while describing them as ‘buckets’ may be an exaggeration, are still enormous by comparison with what we are used to. We are reminded again that we are really spoilt in Newcastle by the number of good quality coffee outlets.

By now, it’s time for a trip home and a rest before our final dinner at what turns out to be a magnificent restaurant called NOPA – or ‘North of Panhandle’

It’s an early start on our departure day, and we pack and tidy up before catching a cab direct to San Francisco International Airport where we are eventually aboard our flight to San Diego.  An uneventful hour and a half later and we’re in another cab and finding our hotel just to the North of the Gaslamp Quarter in San Diego. 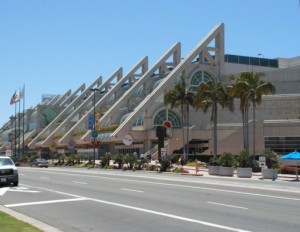 Our room’s not ready yet so we walk down to the San Diego Convention Centre and register and have a bit of an orientation walk around the Centre which is playing host to around 16000 educators and exhibitors for the 2012 International Society for Technology in Education (ISTE) Conference.

Now lugging another bag full of programs, vendor advertising and other bits and pieces, we catch one of the free conference shuttles back to our hotel, check in and have a quick break before walking down to the Marriott and a reception hosted by Intel, which gives us the chance to catch up with some friends from past conferences and other educators.

We end what has been a long and busy day with a nice dinner and discussion with a teacher colleague from Sydney and her family before a stroll back to our hotel through the Gaslamp Quarter which is abuzz with restaurants and bars. Tomorrow will be a full day of ‘conferencing’ topped off with Ed Tech Karaoke.